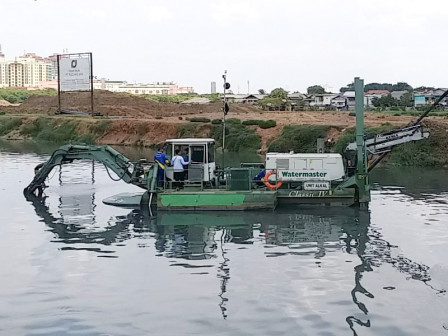 " Watermaster testing has been going for a week"

"Watermaster was procured in 2014. We have three units, two of them are being operated at Ria Rio Reservoir, while the other one is being maintained," said Juaini Yusuf, Head of Jakarta SDA Agency, Tuesday (11/24).

Watermaster, he added, is used to make the dredging work easier in area with shallow water. This machine is modified into amphibious dredger thus it can float in shallow water.

"Watermaster testing has been going for a week. We are currently testing the cutter pump and installing the drain pipe," he mentioned.

His side planned to dredge mud sedimentation with volume 172,000 cubic meters. Currently, its process has reached 80 percent.

"Dredging process has reached 80 percent. It is estimated to finish in mid December, but reservoir maintenance will be carried out regularly after that," he stated.

As many as 7 heavy equipment are operated to run Gerebek Lumpur Program in Ria Rio Reservoir.