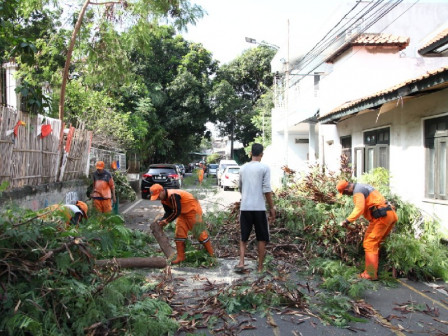 " From January until the first week of September, we have pruned 5,552 trees"

Central Jakarta Park and Urban Forest Sub-agency Head, Mila Ananda mentioned, her side has carried out light pruning to 2,025 trees, moderate pruning to 2,911 trees, hard prunning to 571 trees, and cutting down 45 trees.

Several trees needed to be cut down due to rotten, sick, and considered dangerous to people who passing by around the trees.

In the first week of September, her side has pruned 62 trees. In detail, light pruning to 19 trees, moderate pruning to 26 trees, hard pruning to 15 trees, and cutting down 2 trees.

"During PSBB period, we remind all of our personnel to implemnet health protocols, such as 3M, at least to maintain safe distance and wear a mask. It is done to curb COVID-19 transmission," she explained.