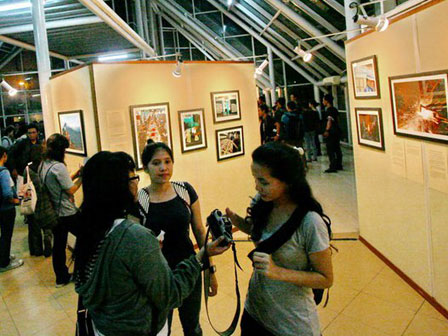 (Foto: - Beritajakarta.id)
Jakarta Communication, Informatics, and Public Relations Department once again holds competition and photography exhibition about the capital city. Previously, such event had been held in 2011 and 2012.

Head of Jakarta Communication, Informatics, and Public Relations Department, Eko Hariadi, said this event will be held starting upcoming March 9 until May 31. “This event is held as a way to appreciate the art of photography by individuals as well as communities that captured the best sides of the capital city,” he stated, Saturday (3/8).

Hariadi hopes the amount of participants joining the event this year could increase from previous years. In 2011, 500 participants incorporated in several communities took part and produced 925 photos. From that amount, 100 photos were showing the facts about life in Jakarta which covered in themes like humanism, city life, and night view.

Then in 2012, the participants increased sharply to 1,541 people with amount of photos were 2,500 pieces. “This year, we hope there would be more participants joint the event,” expressed Hariadi.

For this year, the event, which named Color of Jakarta, will compete for four main categories, namely DSLR with themes of tourism, city space, car free day, and photo essay. Later, the photos will be exhibited on Jakarta Provincial Government’s official website, www.jakarta.go.id.