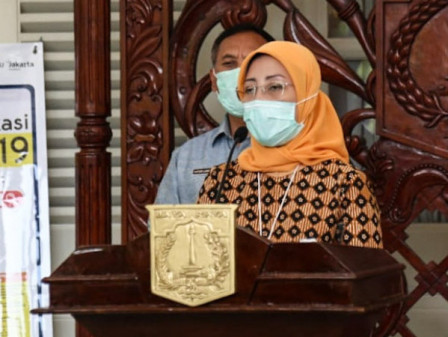 The Jakarta has seen a surge in Covid-19 cases recently, forcing the government officials to strongly urge citizens to increase vigilance.

" We continuously intensify 3T (Testing, Tracing, and Treatment), but we can see here that the cases spike did occur after the Eid holiday"

Based on the latest Jakarta Health Agency (Dinkes)'s data, as many as 2,096 new cases were found on June 10. 51 percent or 1,070 cases were the results of tracing the Puskesmas, the majority of which were done in RT PPKM Mikro, while 1,026 cases were found in health facilities.

"We continuously intensify 3T (Testing, Tracing, and Treatment), but we can see here that the cases spike did occur after the Eid holiday. From the identification of the homecoming cluster as of June 10, there were 2,008 positive cases from 988 families. Hence, we urge residents to increase vigilance, do not relax health protocols, as transmission is still happening," she explained, as quoted by Jakarta PPID's press release, Thursday (6/10).

"The addition of cases is evenly distributed, it happens in 43 sub-districts in Jakarta, except in Thousand Islands. Then 5 sub-districts that contributed the most cases were Cengkareng (109 cases), Cipayung (80 cases), Jagakarsa (80 cases), Duren Sawit (71 cases), and Kebon Jeruk (68 cases)," she explained.

Based on PPKM Mikro as of June 7-13, there are 3 RTs in the red zone and 23 RTs in the orange zone, which were carried out by massive tracing. They consisted of Cipayung, Cengkareng, Cilincing, Ciracas, Pasar Minggu, Kemayoran, and Pulogadung. Further information regarding the RT control zone can be accessed at corona.jakarta.go.id/id/zona-pengendalian-rt.

She also urged the community to remain vigilant against new virus mutations that are more easily transmitted and cause more severe symptoms. Jakarta was actively conducting Whole Genome Sequencing (WGS) sample checks, of which 649 samples had been examined.

"In Jakarta, there have been 19 cases of Variant of Concern with new virus mutations, 18 of which have a history of travel from abroad and one case of local transmission," she explained.