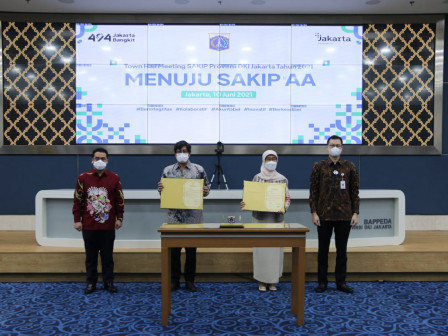 Amid the Covid-19 outbreak, the Jakarta administration keeps doing various efforts and activities to improve the Implementation of the Performance Accountability System for Government Agencies (SAKIP). It is done through strengthening the Regional Apparatus Head's commitment to realize results-oriented organizational performance in Jakarta. Hence, they held a Town Hall Meeting Towards SAKIP AA, in the Pattern Room of Jakarta City Hall, Central Jakarta, on Thursday (6/10).

On that occasion, Jakarta Vice Governor Ahmad Riza Patria asserted that the city was fully supporting the government's efforts in realizing world-class governance through continuous improvement effor ts, in a bid to improve performance accountability, and realize effective and efficient governance. He also said, SAKIP is an inseparable part of the Bureaucratic Reform framework which was built in the context of improving good governance.

"The role of all elements is also important for strengthening the accountability of a collective effort, especially the heads of regional apparatus and officials under the Jakarta administration. Last year's budget constraints as a result of the pandemic didn't stop our efforts to strengthen performance accountability. Collaboration to strengthen the capacity of officials and civil servants in the management of organizational performance is done in collaboration with the World Bank and the State Finance Polytechnic (PKN) STAN. Similar cooperation will also be continued for 2021," he expressed, as quoted by Jakarta PPID's press release.

In the framework of bureaucratic reform, he explained, strengthening accountability is part of the 8 areas of change in Bureaucratic Reform. In the 2017-2022 RPJMD, the Bureaucratic Reform Index and the AKIP Score/Predicate had become the Main Performance Indicators that support the achievement of the 3rd Mission, which is to make Jakarta a vehicle for the State Apparatus who work, serve, and solve various problems of the city and citizens, effectively, meritocratic and integrity.

"Regional apparatus head has a central role in achieving the goals and objectives of organizational performance in an accountable manner through the implementation of good and results-oriented performance management. It shows the seriousness of the government, making Bureaucratic Reform and Strengthening Accountability the most important part in improving local governance and realizing regional development, the benefits of which can be felt by the public," he asserted.

Ahead of the 2021 AKIP assessment, corrective steps should continuously be carried out by following up on the Administrative Reform and Bureaucratic Reform (PAN-RB) Ministry's recommendations. Therefore, the main purpose was not only predicate/score but to change "sent" to "delivered", thus regional development benefits were really felt widely for the community. The integrated performance information system is one of the supporting systems for the Jakarta administration to improve the effectiveness and efficiency of the performance accountability.

Further he also expressed an appreciation to the ranks of the PAN-RB Ministry.

"From all the efforts that we have made, we still need guidance and assistance from the ministry in charge of the Performance Accountability System for Government Agencies. That's why I hope the coordination between the SAKIP Team and them can be done more intensively, and produce good results for the improvement of SAKIP," he continued.

To support it, the administration issued three rules about the performance-based salary framework and also guidelines for SAKIP, namely Governor Regulation number 18, 19 and 121/2020. They were also improving the quality of performance planning through changes to the RPJMD and changes to the Strategic Plan for Regional Apparatuses, by adding indicators for the objectives of the RPJMD and improving the cascading quality of performance at the Provincial Government and Regional Apparatus levels down to the smallest unit and continued to the implementing level. It shows they are very serious in improving performance accountability and good governance.