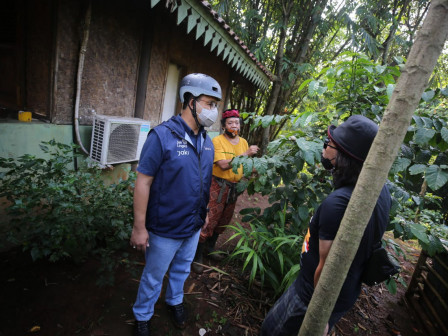 He conveyed his appreciation for initiatives taken by Babe Idin and other environmental activists who are conserving water ecosystem in Jakarta. Thus it can be used as reference to reserve other riverbanks. Moreover, Jakarta is a city passed by most natural rivers in Indonesia.

"This morning, I stopped by Babe Idin's place. He has carried out conservation to protect natural environment around Pesanggrahan River and make it a role model. Earlier, we planted bamboo and cinnamon," he said, as quoted from Jakarta PPID Press Release.

"I want to express my appreciation and we in Jakarta need a good example and practice that can be used as reference regarding ecosystem conservation efforts. So we hope that if Jakarta residents want to see how a natural green area on the riverbank, this is the example," he added.

Not only planting bamboo, he also visited Sangga Buana City Park that has been planted with various plants that have economic value, such as coffee, breadfruit, spice plants, as well as bee's nest. Those plants are expected to be commodities that will increase economy of residents who live on riverbank.

"Moreover, there is also an interesting proposal regarding choice of plants that are suitable to be planted around river that can maintain ecosystem and provide economic benefits, for example coffee that has been planted here and will be a productive plant," he mentioned.

On the other hand, Idin explained that bamboo is chosen since it is a pioneer plant which is good at absorbing water, easily adapting to wet environment, improving soil structure, and can grow on steep land.