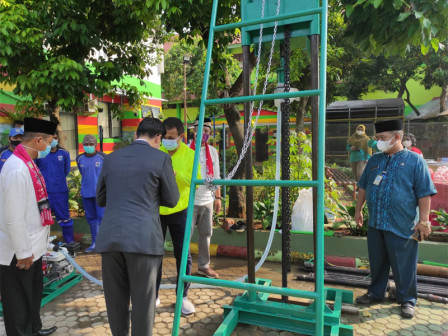 (Foto : Nurito / Beritajakarta.id)
The East Jakarta administration, received assistance in the form of a drilling machine for the construction of infiltration wells from PT Cosmax Indonesia, on Friday (5/21).

" Hopefully it can optimally handle inundation and flooding in Ciracas area"

"We hope the company can also help economic recovery for East Jakarta residents. Not in the form of money, but action through training, coaching, and the provision of facilities and infrastructure for selling," he said.

PT Cosmax Indonesia President Director, Cheoung Min Kyoung added the assistance was a form of his party's commitment to share with the surrounding environment.

"Hopefully it can optimally handle inundation and flooding in Ciracas area," he hoped.