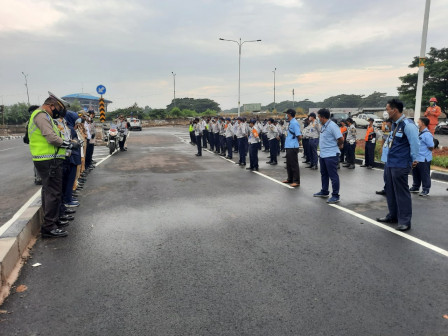 (Foto : Nurito / Beritajakarta.id)
The one-way traffic system in the Pulogebang area came into effect, on Tuesday (5/18). To support it, a total of 100 joint personnel have been alerted to assist passing drivers.

It was applied in a number areas of East Jakarta, namely Jalan Cacing on the east side and west side of JORR Toll Road, Sentra Primer Flyover and Cakung Statipn.

"I call on the motorists to obey with applicable rules in the field for the sake of safety and comfort," he asserted.

Supervision and Control Division Head, Riky Erwinda added as many as 34 personnel had been deployed at 12 points. They would manage and direct drivers to follow the traffic signs in the field.

"These personnel have been alerted since the one-way system applied," he stressed.

By doing so, the one-way system was applied on Jalan Sumarno, namely the vehicles coming from the west to east side or from Pondok Kopi towards Pulogebang, including the vehicles from the east side (Bekasi) to west side (Jakarta) diverted.

Similar system was also spotted on Jalan Cacing on the west side, where the vehicles from Cakung Station to East Jakarta Mayor Office or Cakung Flyover would be directed to Jalan I Gusti Ngurah Rai.