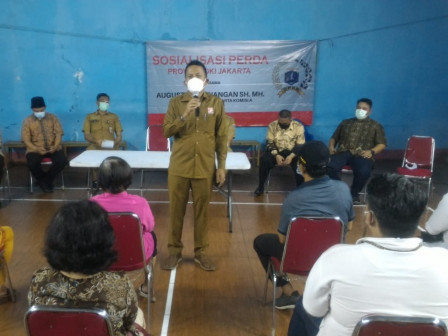 Jakarta Legislative Council (DPRD)'s Commission A Member, August Hamonangan, held a socialization on Bylaw number 8/2007 on public order (Tibum) to residents of RT 09/15, Menteng Dalam Urban Village, Setiabudi, South Jakarta, on Tuesday (5/1). It was held at the Badminton Sports Hall, and was attended by the ranks of urban villages and sub-districts.

" If it is ignored, it will also disturb public order, as they will have an impact on other communities"

According to him, it was important thus they understand the Jakarta Provincial Government's policies in an effort to enforce regional regulations. For instance, about the existence of a ban made by the government amid the COVID-19 pandemic, which aimed to prevent the spread of the virus by requiring the public to implement health protocols.

All this time, he furthered, most people only knew about the public order regarding the prohibition of street vendors (PKL) selling on the sidewalks, buildings that did not have a building permit (IMB), and other general public order.

"If it is ignored, it will also disturb public order, as they will have an impact on other communities," he explained.

He hoped that they could understand that in its development public order also involves compliance, such as the governor regulation which states that they should comply with the health protocol.

"This is because the sanctions are not only on yourself. But it will also have an impact on other people," he closed.