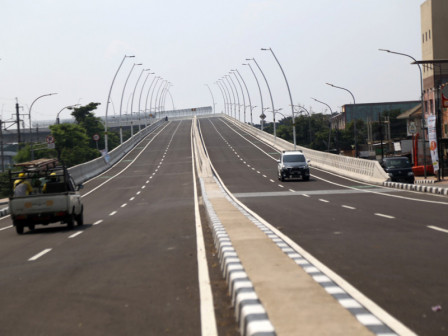 (Foto : Mochamad Tresna Suheryanto / Beritajakarta.id)
Jakarta Bina Marga Agency is about to conduct a trial of open traffic for phase 2 Cakung Flyover, East Jakarta on May 11-18. It is applied at 6 AM to 11 PM in conjuction with the one-way system (SSA) in Cakung area.

"Based on the last week's observation, it would run smoothly and would operate permanently, including one-way system," he expressed, Sunday (5/9).

He explained the agency had conducted evaluation after passing through the phase 1 trial on April 19-21. There were still efforts that should be done in the field.

"We made improvements such as geometric repairs to the position of the off ramp flyover thus it runs smoothly at the intersection with the side artery road of the East Outer Ring Road," he explained.

"SSA supporting direction signs have been equipped for the west side of the Outer Ring Road Toll. For the east sode or side of Pulo Gebang Bus Terminal, we are going to do another checking but if it is unoptimal, we will use temporary signs, like banner," he explained.

He added it was necessary to extend the kanstine in the KBT bridge widening area towards Cakung Station to prevent conflict between traffic from the direction of Cakung Station and traffic that came out of the east side of KBT.

As for the information, the flyover was made to support the railway crossings in accordance with Law Number 23/2007 on Railways.

It was built as a replacement for the railway crossings near the Cakung Station, which had been closed by the Ministry of Transportation as it was deemed prone to triggering accidents and congestion.

Aside that, the Cakung Flyover is an alternative for traffic passing through the East Jakarta Mayor Office Flyover to support the movement of vehicles from west to east and vice versa.