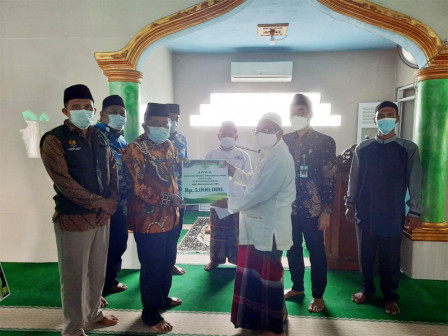 " Hopefully this can provide benefits for the prosperity of the mosque"

He disclosed the aid was dedicated to Assa'adah Mosque (Lancang Island) and Al-Ikhlas Mosque (Pari Island). Each received Rp 5 million.

"Hopefully this can provide benefits for the prosperity of the mosque," he expressed.

He explained the aid handover was carried out in conjunction with the Safari Ramadhan activities.

Together with the entourage, he returned to the Safari Ramadhan on Pari Island which aimed to strengthen the silaturahmi (friendship) between umara, ulama and residents.

"I also socialize development programs, as well as government policies and absorb residents’ aspirations," he explained.

In the meantime, Mosque Prosperity Council (DKM) for Assa'adah Mosque, Lancang Island Chairman, Marsyah expressed his thankful for the visit and attention of the Thousand Islands Regent and Baznas Bazis.

"Thank you for the operational aid given to the mosque. We will use this mandate well and hopefully it will become a record of worship for those who have given charity, donated charity and alms," he stated.