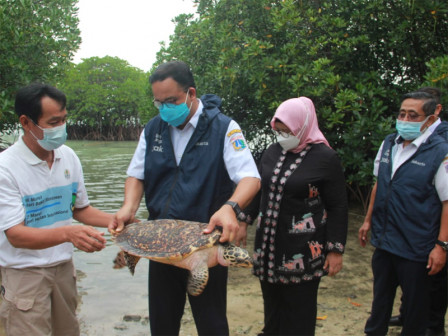 "He (Anies) agreed to name a pair of adult hawksbill turtles that were released, Lestari for female turtles and Tangguh for male turtles," he expressed, Monday (5/3).

According to him, his community managed to rescue eggs and conserve hawksbill turtles in the waters of Sebira Island which were released periodically when they were of sufficient age.

"Hopefully they can breed and avoid extinction as their numbers are dwindling," he explained.

He added conservation and environmental preservation were also carried out by increasing or expanding the mangrove planting area.

"We also plant 100 mangrove seedlings on the east side of the Sebira Island Beach area. Apart from reforestation, mangroves are very useful for preventing abrasion," he stated.

"Thank you for the concern and collaboration that has been established. Hopefully it can continue to be part of environmental conservation efforts," she hoped.