Residents Affected by Oil Spill must Be Compensated, Regent Says 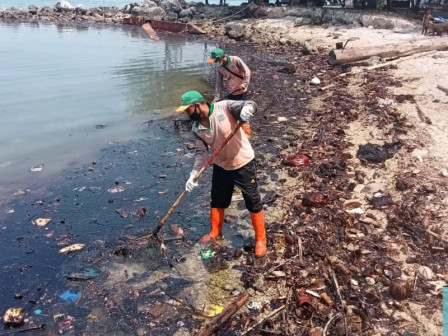 " Immediately recover and give them (the affected people) compensation"

According to him, it had an impact on tourism and fisheries businesses, including fish farmers in the keramba (net cages).

"Immediately recover and give them (the affected people) compensation," he expressed, Monday (4/26).

He also wanted them to immediately provide personal protective equipment (PPE) for PJLP officers from the Environmental Sub-agency, PPSU, and residents who help clean the oil.

"This situation is very dangerous. I also want the cleaned oil to be transported," he asserted.

Through a written statement from the Manager for Communications Relations & CID PT PHE ONWJ, Hari Setyono uttered he had coordinated with the Environmental Sub-agency to conduct cleanup action at the location.

"We are still alerting the Oil Spill Combat Team (OSCT) to patrol the surrounding areas to ensure conditions are under control," he explained.

In the field, he also coordinated with locals for quick handling in order to minimize its environmental impact.

"They (Pertamina) have checked the location according to standard handling procedures in maintaining facility reliability," he added.

Thousand Islands Environmental Sub-agency Head Djoko Rianto Budi Hartono added that as many as 60 officers had been on standby to clean up the oil on Untung Jawa and Pari islands, South Thousand Islands Sub-district.

"Quick handling is done to minimize the negative impact of oil spill on marine habitats and ecosystems. We still continue to do handling together with PPSU," he explained.

"Until now there has been no clarification on the party responsible for this oil spill," he stated.