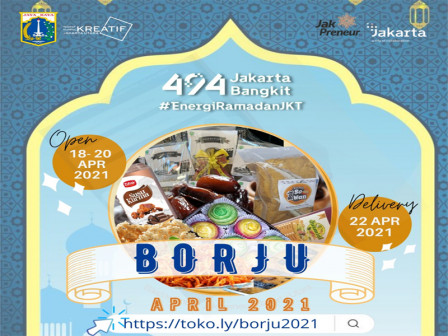 The North Jakarta Industry Trade Cooperatives and Small and Medium Enterprises (PPKUKM) Sub-agency once again holds the North Jakarta Jakpreneur Online Bazaar (BORJU), which has been ongoing since April 18 to 20. It is enlivened by 200 SMEs by presenting around 500 products.

She explained BORJU products were marketed using a pre-order (PO) system. Technically, the buyer should order and buy the product first before production begins with an estimated waiting time until the product was available and sent to the buyer. For the first week of April 2021, pre-orders would be held on April 4 to 6 and product shipments on April 8.

"We open pre-orders in the third week of April 18 to 20. On April 22, we will send the products to the buyer. For deliveries, we cooperate with ojol (online motorcycle taxis) and courier services," she said.

According to her, a total of more than 500 products were marketed by around 200 SMEs from six sub-districts throughout North Jakarta. BORJU was a marketing event for the superior products of Jakpreneur-assisted SMEs in the North Jakarta area. People who want to place an order could access the catalog at https://toko.ly/borju2021.

Last year, she added, the total turnover obtained from the implementation of BORJU reached Rp 105,890,050. It was also held online 10 times, which were attended by 188 Jakpreneur-assisted SMEs and 642 marketed products.

"BORJU helps move the wheels of the economy, especially during the Covid-19 outbreak. Besides SME, supporting parties such as ojol and courier services also feel the benefits of BORJU," she stated.