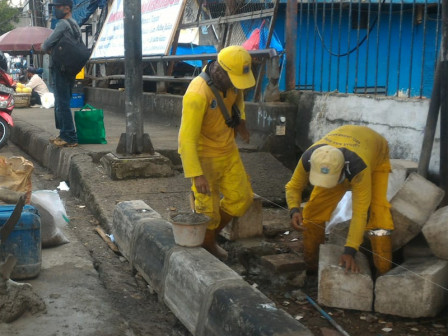 Sidewalk arrangement on Jalan Raya Ragunan, in front of Block D of PD. Pasar Jaya, Pasar Minggu, South Jakarta which has been carried out since March 27, is targeted to be completed by the end of April. This arrangement is carried out through collaboration between Bina Marga Sub-agency, Water Resources (SDA) Sub-agency, and City Park and Forestry Sub-agency.

"Current progress has reached 50 percent. We are targeting to finish it by the end of April," he said, Tuesday (4/13).

For this sidewalk arrangement work, his side deployed 8 personnel to install paving blocks and create six ditches.

Meanwhile, SDA personnel assisted in dredging mud sedimentation and building manhole. Then, City Park and Forestry Unit personnel built 50-centimeter parks on the left and right sides of the sidewalk.

"This arrangement is not only to beautify the area, but also to make pedestrian safer and more comfortable," he stated.