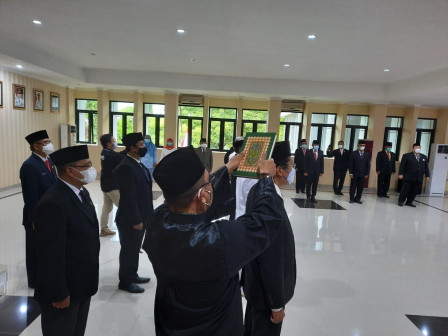 As many as 16 echelon-III and -IV officials were inducted by the Thousand Islands Regent, Junaedi, on Thursday (4/1).

According to him, the position carried was a mandate that had to be carried out as well as possible.

"I congratulate you and hope that everyone can conduct the mandate according to the responsibilities given," he expressed.

He went on to say that those newly appointed to be more creative and able to innovate, especially in relation to providing the best service to residents.

"Let's work together to advance the Thousand Islands and make the residents more prosperous," he asserted.

Here are the names of the officials who have been sworn in today:

3. Raviandri as Sub-agency Head of Manpower, Transmigration and Energy

15. Eko Wahyono as Sub-division Head of Administrative for SDA Sub-agency