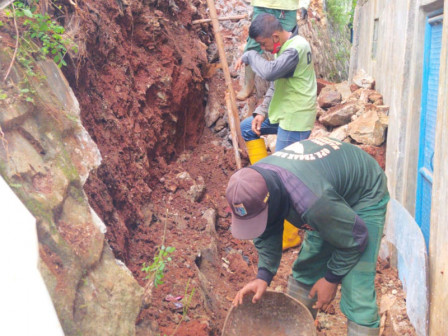 The East Jakarta Parks and Urban Forest Sub-agency is targeting to complete the repair of a collapsed sheet pile at the Susukan Public Cemetery (TPU), Ciracas, East Jakarta in early April.

Forestry and Green Belt Division Head Atang Setiawan disclosed the sheet pile as long as 25 meters length with 2.5 meters height collapsed after being hit by the floods some time ago.

He explained it is conducted on the border with the guardrail of SMPN 174 Susukan and the houses of local residents. Especially for the sheet pile bordering the school, the process is almost complete and will be continued with another sheet bordering the residents' houses.

"It is done by sending eight personnel. Thus far everything is still going smoothly without a hitch," he stated.