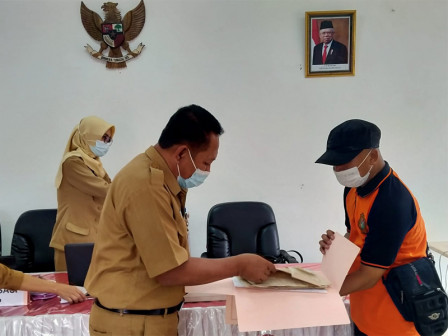 "We hope residents can take advantage of this service to restore their damaged documents and digitize it," he said, Tuesday (3/16).

According to him, it takes about 20-30 minutes to restore damaged documents per sheet. However, if the file is valid, it may take up to 2 hours because it must be handled with extra care. After document is restored, file will be stored digitally.

Bidara Cina Urban Village Head, Dadang Yudi Hartono stated, his side has socialized residents affected by flood in 18 RTs and 3 RWs, namely RW 06, 07, and 11. Residents have responded it well and will take care of their damaged documents.

"During socialization, residents responded it well. We keep informing the residents although last year they have participated in this document restoration and digitization program," he mentioned.

Mahmuri, resident of RT 06/07 Bidara Cina, admitted he was greatly helped by document restoration and digitization program. He took advantage of this free program to restore two House Sale and Purchase Deeds (AJBs) which damaged by floods and eaten by termites.

"Those two AJBs were published in 1968 and 1969. Because those documents were damaged, we restored and digitized it," he conveyed.