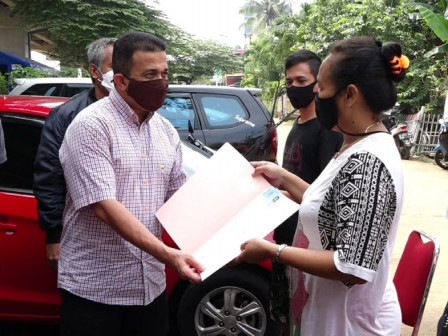 Residents affected by flooding in RW 04 area, Cipinang Melayu, Makasar, Sunday (3/7), received population documents in the form of ID card and family card from the Mayor of East Jakarta, Muhammad Anwar, on Sunday (3/7). It was done symbolically at RW 04 Post.

" According to the Governor's mandate, the government must be present and prioritize services well when disaster occurs"

He disclosed those documents were distributed, as many of their documents were lost during the flood. Which was why, the Population and Civil Registration Sub-agency held free services for making population documents to help them.

"According to the Governor's mandate, the government must be present and prioritize services well when disaster occurs," he said.

He stated the service could be done at RW post and other places for getting maximum results under stricter health protocols.

"If it is needed, we plan to hold population document restoration services and other important documents," he expressed.

"No mobile services during the pandemic period. However, it is still done through jemput bola system, by collecting data on flood-affected areas," she uttered.

She added it was still ongoing. Not only in Cipinang Melayu but also in other areas such as Bidara Cina, Cawang, Makasar, Kebon Pala urban villages and other urban villages that were affected by flooding two weeks ago.