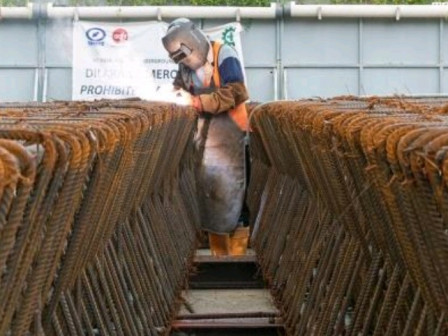 " It will also be the meeting of the East-West line"

Aside that, the jet grout and king post station projects have also started, including relocation of drainage and preparation of work equipment for D-Walls such as soil pits and foundation silos at Thamrin Station.

PT MRT Jakarta President Director William Sabandar disclosed his party was about to prepare a public information center in Monas Station area, which would function as a media center.

"It presents a number of mock-ups such as MRT Jakarta Phase 2, discovery of cultural heritage during construction phase 2, and a profile video of the MRT Jakarta," he expressed, Sunday (2/28).

He explained Thamrin Station is one of the stations in phase 2A, which will be the longest station, which is around 410 meters with a two-story underground building structure.

"It will also be the meeting of the East-West line. As for Monas Station is a station that is directly integrated with the Monas Park area. We target to finish them in March 2025," he explained.

He added it was different from phase 1, phase 2 was built at the same time by building a station area with a transit oriented development concept.

"Its construction doesn't only prepare the infrastructure for the Jakarta MRT station. However, it is also the area as a combination of transit and human functions, activities, buildings, and public spaces that will optimize access to public transportation thus it can support passenger carrying capacity," he explained.

As for the information, the phase 2A will connect the Bundaran HI Station to Kota Station for about 5.8 km and consists of six underground stations namely, Thamrin, Monas, Harmoni, Sawah Besar, Mangga Besar, Glodok, and Kota.

It is divided into two segments, namely Bundaran HI - Harmoni, which is targeted to be complete in March 2025 and Harmoni - Kota in August 2027.

Then the phase 2B, which is planned to continue from the Kota to West Ancol Depot, is still in the feasibility study stage.