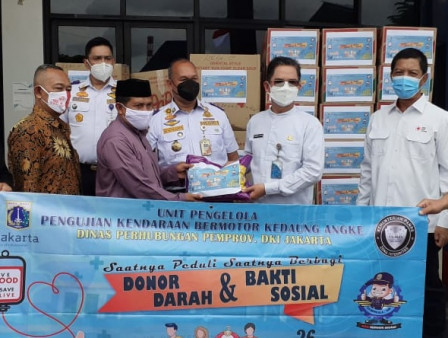 The Kedaung Angke Motor Vehicle Test (UP PKB) provides staples and clothes to the people affected by floods in West Jakarta.

It was purely from civil servants (PNS and ASN) and PJLPs under Kedaung Angke UP PKB.

Hopefully, it could be useful to lighten the flood victims' burden.

Rawa Buaya Urban Village Head Syafwan Busti explained it was very helpful, as 16,000 out of 24,000 households were affected by the flood a few days ago. He added, it would be distributed to RW 02 residents where the area was most affected.

"In RW 02, around 1,800 households are affected by the overflowing waters of the Mookervart River for two days. Hopefully the aid may help them in fulfilling their daily needs," he hoped.

"So far, the aid for residents has also been met," he closed.