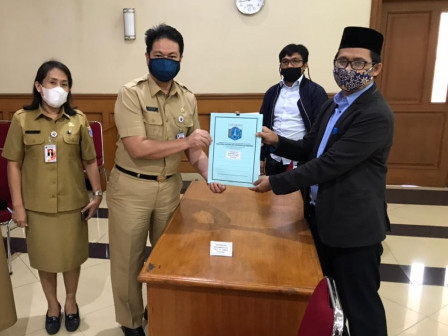 Jakarta Provincial Government has signed a cooperation agreement with 4 universities on the implementation of integrated entrepreneurship development in order to provide a forum for Micro, Small and Medium Enterprises (MSME) actors incorporated in Jakpreneur.

PPKUKM Agency Acting Head, Andri Yansyah revealed that one of governor's missions was to make Jakarta a place for state apparatus to work, serve, and solve various problems of the city and its residents, effectively, meritocratically, and with integrity. That meant the state apparatus would not only be able to work effectively and with integrity, but also be able to realize an inclusive, open and collaborative governance.

"This collaboration aims to foster entrepreneurial potential by encouraging and facilitating entrepreneurial creation, to improve the quality and utilization of human resources as entrepreneurs through the use of technology and local resources in order to have a competitive advantage for economic strengthening, to suppress unemployment and poverty, and to increase the number of independent, quality, resilient, and reliable entrepreneurs through the development of a productive business scale, either managed individually or in groups," he expressed, as quoted by Jakarta PPID's press release.

He hoped that it could spark the growth of small and medium entrepreneurs who have driven more than 90% of Jakarta's economy, especially related to employment absorption. They also played a key role in economic growth, reducing unemployment, and reducing poverty.

"It is also expected to reduce unemployment and alleviate poverty, as well as help drive the economy of MSME players," he stated.

As for the information, the collaboration with universities is one of the efforts for economic growth, especially related to employment absorption, and a project/initial step for implementing a cooperation agreement. And until now the registered Jakpreneur members have almost reached 226,280.