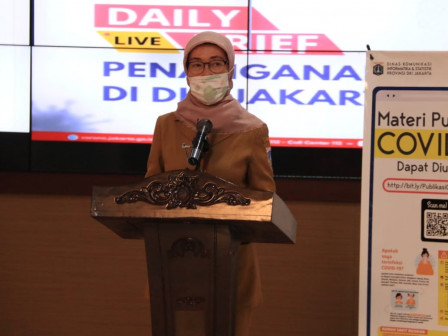 Based on data compiled by Jakarta Health Agency, PSBB period extension which applied on February 7-22, 2021 was able to reduce active cases rate in Jakarta.

In line with decline in active cases, Bed Occupancy Rate (BOR) in ICU and isolation beds had also continued to decline. It shows that Jakarta Government's efforts to increase isolation beds and ICU's capacities are effective in increasing patient's recovery rate, as well as reducing BOR.

Although there was decrease in COVID-19 active cases and BOR in ICU and isolation beds, Jakarta Governor, Anies Baswedan stated that community should not be careless and must be remain disciplined in implementing 3M (wearing masks, washing hands with soap, and maintaining distance). Moreover, it will be difficult to make active cases continue to decline due to extreme rain that hit Jabodetabek in the last few days and caused flood, that requiring some residents to stay at evacuation posts.

"We must not let our guard down, because virus is tireless, moreover we also face other challenges. In anticipating impact of inundation, Jakarta Government has prepared various evacuation posts with strict health protocols, facilities to test evacuees with symptoms, and controlled isolation tents for evacuees who are positive," he said.

He emphasized that even though the trend has shown significant decrease, Jakarta Government will continue to improve testing, tracing, and treatment (3T) capabilities, by improving number of tests, coordinating and collaborating with various parties to carry out tracing and improving capacity in ICU and controlled isolation locations, such as in hotels and Wisma Atlet.

"Controlled isolation site is very helpful in suppressing virus spread, especially family cluster since it still dominates number of clusters in Jakarta. Thus when someone is exposed and isolated, it will reduce the risk of transmitting virus to other family members," he conveyed.

Commitment in improving 3T action will be carried out together with full support in mass vaccination for both health workers and non-health workers, which started by vaccinating traders in Tanah Abang, Central Jakarta and elderly. Henceforth, it will target religious and community leaders as well as other Jakarta residents.