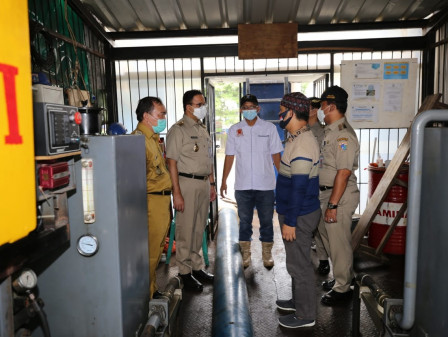 " Once the river returned to normal, we pump the floodwater massively"

First, they visited RT 02/01 Evacuation Post which looked deserted because most residents had returned to their homes. Besides, they also monitored pumping process that drained water from Rawa Buaya to Mookervart River.

"Vice Governor and I monitored the condition at RT 02/01 Rawa Buaya Urban Village which flooded due to overflowing Mookervart River yesterday, and once the river returned to normal, we pump the floodwater massively," explained Anies as quoted from Jakarta PPID Press Release.

Jakarta Government through West Jakarta Administrative City Government deployed 24 pumps to drain floodwater in Rawa Buaya to Mookervart River, thus on Monday (2/22) morning, inundation had receded and residents could do their normal activities.

He appreciated personnel's hard work in handling flood and inundation. Instruction to immediately dry up inundation was followed up quickly and precisely by personnel on duty.

"Thank you for personnel and RT/RT heads, although they are not visible in front of camera, they work day and night to ensure inundation recedes as stated by RW head before, that it usually takes 5 days to recede, but this time all has receded in less than 24 hours," he conveyed.

"Thank God, flood handling in this year is extraordinary, the government is responsive, including Governor, Mayor, and other civil apparatuses (ASNs). In the past, inundation in Rawa Buaya used to take 4-5 days to recede, but now it's only 1x24 hours," he mentioned.