Anies Appreciates Collaboration between Officers and Residents to Handle Floods 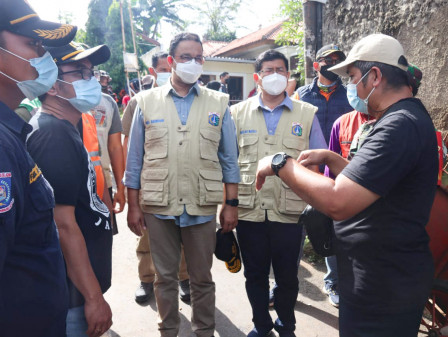 " Alhamdulillah conditions are much more under control since afternoon"

In that occasion, the governor coordinated with the ranks regarding the update of information on inundation and flooding that occurred due to the rains that hit Jakarta and its surrounding areas.

He gave appreciation to all parties involved in overcoming inundation and flooding, as well as helping flood victims.

"I saw a family with a vehicle that stopped at flood location. Then they took the food box down, turned it over and then left again. This is merely helping each other. It illustrates that so many good people are helping others, moreover we are in the pandemic situation," he expressed, as quoted by Jakarta PPID's press release.

He also expressed his deep sorrow, because of the casualties as a result of the disaster. As known, five died in the flood disaster. Among them were children who were playing when the flood occurred.

"I have instructed my men and locals to admonish the children not to play when the flood occurs. This is very risky. There are holes and unexpected water flow resulting in things we do not want. So let's care for each other," he explained.

The governor also described an update on conditions in the field related to areas that started to recede. It could be seen from Ciliwung, Krukut and Sunter rivers that had been in the normal position since morning.

"Flash floods from outside Jakarta, from the central and upstream areas have decreased since morning. And the pumping process continues until dawn. Thus we can see this morning the roads are dry already and vehicles can pass them well. Alhamdulillah conditions are much more under control since afternoon," he explained.

As for information, while visiting the Manggarai Sluice Gate, the Governor was accompanied by the City Secretary, Marullah Matali and his staff; Assistant for Development and the Environment, Yusmada Faisal; Acting Assistant for Government, Sigit Wijatmoko; Acting Assistant for People's Welfare, Suharti; Assistant for Economy and Finance, Sri Haryati; and Communication, Informatic and Statistic Agency Head, Atika Nur Rahmania.

Residents are urged to remain vigilant. You may contact Call Center 112, and report if you see flood via JAKI application and disaster maps. They must also implement 3M's health protocol.

Jakarta also calls on all people to collaborate together to relieve refugees in the capital. Currently, the urgent needs are in the form of logistics, boats, food, drinks, medic kits, family kits, mattresses, blankets and masks.