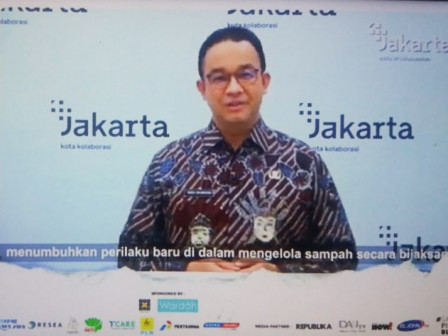 Commemorating the 2021 National Waste Care Day (HPSN) and Indonesian Clean Day, the Jakarta Environment Agency is collaborating with various elements to present a hybrid event today from Ciracas, East Jakarta. It aims to increase public awareness to reduce waste from the source as mandated by the Gubernatorial Regulation number 77/2020 on Waste Management in the Scope of RW.

" So the most important first step is to reduce useless residues, which we call waste"

Jakarta Governor, Anies Baswedan in his speech at the live streaming on Jakarta Environment Agency’s Youtube official account or https://bit.ly/HBI2021Live said, waste management should consider various factors. The city was pushing for a change in the mindset that a city was not only clean and tidy by sending waste to the waste disposal site (TPS).

"But more than that, it changes the behavior of all of us. Our behavior in managing residues. So the most important first step is to reduce useless residues, which we call waste," he explained.

To coincide with the HPSN with the theme "Economic Raw Material Waste in the Pandemic Period", Jakarta wanted to emphasize its commitment to encourage the waste management sector to drive the economic growth and as one embodiment of one of the principles of sustainable waste management, namely waste to resource through the implementation of a circular economy and waste as an energy source.

"There is also something that cannot be managed, namely B3 (hazardous and toxic materials), which will be transported by officers of the Environment Agency. There is also residual waste, which will have to be sent to Bantargebang Landfill," he continued.

All processes were synergized with the role of the local government, where the urban village heads facilitate the implementation and the agency conducted mentoring services by assigning service officers called PJLP.

He revealed it was a large-scale social intervention. Hopefully, it could help step by step, fostering new behaviors in managing waste wisely.

"Colossally, we are starting a new style of treating the waste we produce together. Therefore, we will witness the kick off of the PJLP as RW companion. So please work sincerely, assist the residents as well as possible, surely it will give benefits and can be recorded as a charity from all of you," he stated.

Environment Agency Acting Head, Syaripudin added, the event was intended to become a solid waste management platform to encourage the community's economy in accordance with the principles of waste to resource, waste to energy.

"I thank the sponsors and collaborators of this event," he exclaimed.

It was held virtually and participated by Indonesia Indah Foundation Founder, Angela Jelita Richarson as one of the organizers, and then followed by the introduction of a companion PJLP vest by the Environment Agency Acting Head to several RW representatives.