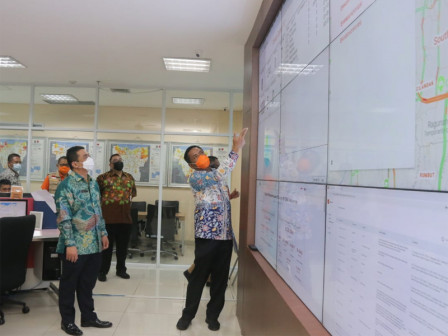 " We must face this weather wisely, calmly and patiently, let's prepare ourselves"

In the visit, he ensured the progress in handling various disaster problems, which was carried out in collaboration with the government and non-government.

"Today I monitor them (Pusdatin). They have good equipment and fast service. Residents just call them at Call Center 112, this is free of charge. There are 18 disaster problems handled. Hopefully we can quickly deal with disaster problems," he expressed, at BPBD Office, Central Jakarta, as quoted by Jakarta PPID's press release.

He then conveyed various logistical availability that required collaboration from the community, such as pumps, parachutes, boats, as well as the needs of refugees such as blankets to mats, drinking mineral water, milk, and pampers. it was hoped that communities could unite and handling disaster impacts could be handled more quickly and optimally.

"We need your help (residents). That is the collaboration between the government and non-government. We have a logistics apparatus and so forth. But more importantly what we want to build is awareness .Willingness, volunteering, community concern is more important. Jakarta is a city of collaboration. Let's have positive synergy, collaborate. Let's prove we can be united, compact, solid," he expressed.

Aside that, the government was also collaborating with 77 organizations that work together with the BPBD to form a rapid reaction team. Along with army and police, they worked 24 hours a day to build collaboration in overcoming disaster problems.

He also urged residents to remain alert to potential flooding due to extreme weather which was predicted to occur in the next few days.

"We must face this weather wisely, calmly and patiently, let's prepare ourselves. Hopefully there won't be floods this year like the previous ones," he asserted.

As for the information, the vice governor's visit was welcomed and accompanied by Jakarta BPBD Acting Head, Sabdo Kurnianto and Jakarta Fire and Rescue Agency Head, Satriadi Gunawan.