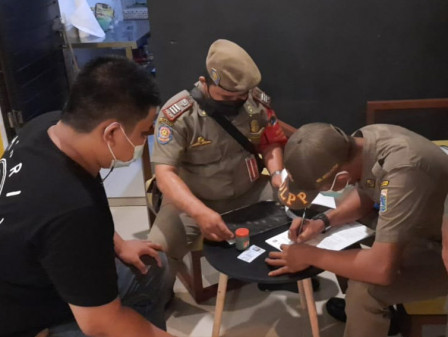 During the operation held on Sunday (2/14) night, East Jakarta Satpol PP netted cafes in Cakung and Rawamangun due to violating health protocols.

" Maximum penalty will be given to provide deterrent effect"

His side gave sanction for temporary closure and one of them was given additional penalty Rp 50 million for committing two violations. If they commit another violation, his side will increase the penalty up to Rp 100 million.

"Maximum penalty will be given to provide deterrent effect for business owners who violate regulations during Micro PPKM implementation. We urge all people to comply with the regulations. If they violate it, the sanctions can be more severe," he asserted, Monday (2/15).

While in Rawamangun, his side forced close and gave written warning to 2 cafes which located on Jalan Rawamangun Muka Barat and Jalan Sunan Drajat.

According to Pulogadung Sub-district Satpol PP Head, Andik Sukaryanto, those 2 cafes were sanctioned because they violated Micro PPKM regulations by operating beyond 9 PM or the specified operational hours.

"We force close two cafes and give written warnings since they operated beyond their operational hours. If later they do another violation, their sanction will be more severe to cause deterrent effect," he closed.