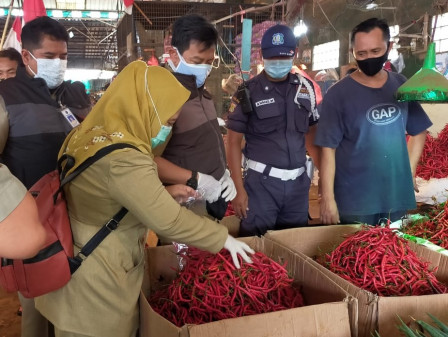 Ahead of Imlek (Chinese New Year), the Jakarta Maritime, Agriculture and Food Security (KPKP) Agency is monitoring the availability and price of 10 strategic foods plus two additional commodities.

"This is influenced by the rainy weather that hit Indonesia. But beef is due to the increase in prices from the country of origin," she expressed, Wednesday (2/10).

"So there is no need to worry that the two commodities will be sufficient. We are also collaborating with the Food Resilience Agency (BKP) to sell cheap food that focuses on 10 strategic foods," he explained.

According to him, monitoring and supervision, as well as sampling of milkfish were held at the Rawa Belong Market which became an impromptu market and only happened just before Imlek.

"This is done to create a sense of security that the milkfish sold is free from formalin. Similar action is also spotted at the Muara Angke Fish Wholesale Market and Muara Baru Modern Fish Market," he stated.

"The veterinary public health laboratory has prepared microbiological and chemical tests, as well as the eber test," he stated.