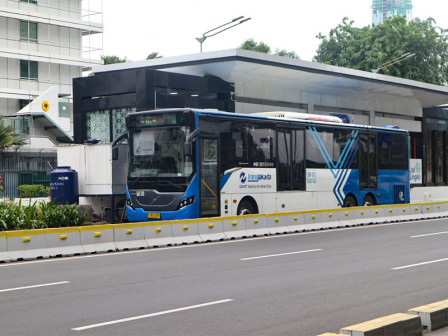 City-owned bus operator, PT Transportasi Jakarta (Transjakarta) is abouet to soon reoperate the non-bus rapid transit (non-BRT) fleet with Blok M - Cipedak (9H) route. It is operated every Monday to Friday starting at 5 AM to 9 PM.

He explained every fleet dispatched was confirmed to have met the health protocol standards, starting from the availability of hand sanitizers and having safety distance signs installed on the seats.

Further, the number of commuters was still limited, namely 50 percent of the total capacity or with a maximum of 30 people.

"It must be obeyed, especially while in the transportation service operational area," he stressed.

As for the information, Blok M-Cipedak (9H) route is the 150th route that has been operated. In future, other routes will also be reoperated in stage. The opening of this route follows up on input from the public, either through the call center at 1500-102 or the official Transjakarta social media.