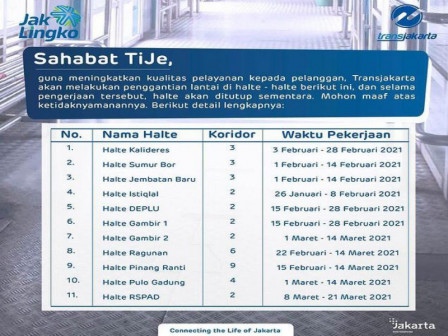 " The repair includes replacing the bus stop's floor material, which was previously made from bordes to fiber cemen"

"The repair includes replacing the bus stop's floor material, which was previously made from bordes to fiber cement," he expressed, Tuesday (2/2).

He explained that the commuters could use alternative stops nearby for activities.

"For instance, those who usually use the Sumur Bor and Jembatan Baru bus stops, may use the Pesakih, Dispenda and Rawa Buaya stops as the closest stops," he explained.

Similar action was also spotted at Kalideres Bus Stop (Corridor 3). However, it was still operating as the process of picking up and dropping off passengers could still be done at the arrival gate.

"We apologize for this inconvenience. In future, we will continue to provide maximum safe and comfortable service," he uttered.

'Do not leave the house if there is no urgent need," he said.