BMKG Warns of Heavy Rainstorms in Jakarta Until Next Week 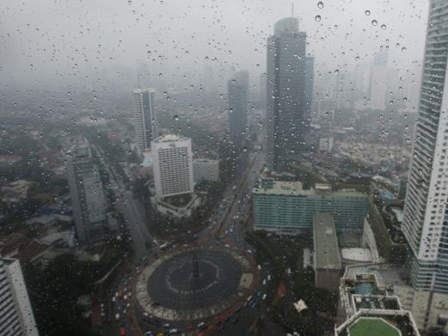 Jakarta Regional Disaster Mitigation Agency (BPBD) issued an early warning of potential rain, which could be accompanied by lightning and strong winds in Jakarta areas on January 28 to February 2.

Jakarta BPBD Acting Head Sabdo Kurnianto conveyed that this early warning came from BMKG, thus people would be more vigilant and prepare themselves.

He stated the BMKG had issued an impact-based weather forecast (IBF) for the impact of floods/flash floods in the last two days, namely on January 28 to 29. Jakarta was included in the potential impact with Alert status.

"That means the public must be vigilant and protect themselves from the wind. We have also urged related OPDs, sub-district and urban village heads in flood and landslide-prone areas to participate in anticipating by alerting the PPSU and Flood Task Force/Sub-district Water Resources (SDA) Agency. The community can call 112 if they need help," he expressed, as quoted by Jakarta PPID's press release.

In the meantime, based on the BMKG's report, most of Indonesia (94 percent of 342 Season Zones) had entered the rainy season. It had also been predicted since last October, that in connection with the peak of the rainy season would occur in January and February 2021 in parts of southern Sumatra, most of Java including Jakarta, parts of Kalimantan, Bali, Nusa Tenggara, parts of Sulawesi, parts of Maluku, parts of Papua, West and southern Papua.

They also issued a high wave alert warning with 1.25 to 2.5 meters high in northern Banten waters, Thousand Islands waters, West Java Sea, Karawang-Subang waters and Indramayu-Cirebon waters. Based on these conditions, awareness of the potential for extreme weather should be increased.

Moreover, the BPBD also issued a flood preparedness guide for the community which could be downloaded via https://bit.ly/PanduanKesiapsiagaanMenghadapiBanjirJakarta.