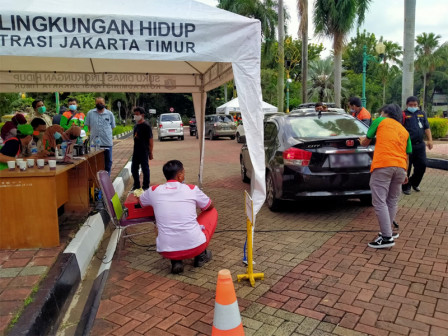 Some 220 vehicles underwent an emissions test on the courtyard of East Jakarta Mayor Office, on Tuesday (1/26). It would take place for three days until Thursday (1/29).

" We really support it, as it is very useful for the Jakarta Langit Biru program"

East Jakarta Community Welfare Assistant Alawi disclosed, although many people took part in the test, his party still implemented strict protocol by requiring the use of masks, washing hands and maintaining distance.

"We really support it, as it is very useful for the Jakarta Langit Biru program. Socialization is routinely held to attract more participants thus the Jakarta air will be cleaner and healthier," he explained.

East Jakarta Environment Sub-agency Head Herwansyah explained, from 220 vehicles, 192 out of them passed the test and 28 failed.

"It will be held along this month. This is for public-owned vehicles and government operational vehicles," he stated.