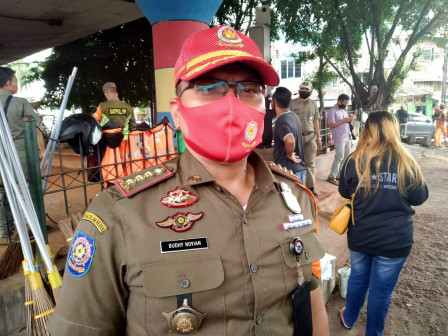 The East Jakarta Satpol PP has noted that as many as 4,118 PSBB violators have been netted for two weeks, precisely on January 11-25. From that number, 4,063 of them were subject to social sanctions and 55 were subject to administrative fines with a total value of Rp 10,750 million.

East Jakarta Satpol PP Head Budi Novian said, those 4,063 were netted by Satpol PP at the city until sub-district level. At the city level, there were 178 violators.

"Every day we deploy 460 joint personnel to hold a mask operation at the city until sub-district level. Those personnel consist of 220 from Satpol PP, 60 from army, 120 from police, 50 from urban village and sub-district ASN, 6 from Garnisun and 4 from POM Air Force Military (TNI AU)," he explained, Monday (1/25).

His side also monitored 727 restaurants in 10 sub-districts. 17 of them were closed down, 146 were disbanded and sanctioned in writing, while the other 564 were safe from sanctions.

"Not only that we also monitor 526 workplaces, industrial place and hotels. 2 of them have failed to implement the 3M health protocol. While for the hotel sector, there are no violation records," he exclaimed.