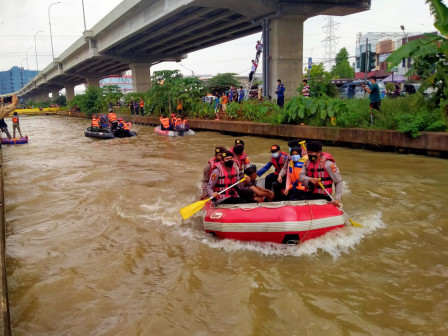 " We choose Cipinang Melayu as it is a flood-prone area"

Five rubber boats were used by officers during the "evacuation" training for flood victims to be brought to the evacuation post. Including firefighters wearing complete personal protective equipment (PPE) evacuated flood victims who were allegedly "exposed" to COVID-19.

Flood victims were also given packaged rice meals and drinks prepared by the East Jakarta Social Sub-agency officers. They set up public kitchens and evacuation tents at that location. Tagana officers also prepared wheelchairs for victims who could not walk on their own after getting off the boat.

East Jakarta Mayor Muhammad Anwar said it was held jointly involving around 200 personnel from the three pillars. As a result, all parties involved when a disaster occurs could immediately act according to the SOP.

"We choose Cipinang Melayu as it is a flood-prone area," he expressed, Saturday (1/23).

When the flood occurred, he assessed, the personnel deployed could reach more than 2,000 from the city government and related UKPD assisted by the army and police.

Then because of the pandemic, handling should be different, where the elderly would be separated from people without symptoms (OTG) in order to minimize the spread of COVID-19.

East Jakarta Metro Resort Police Chief Comr. Pol. Erwin Kurniawan added his party was going to collaborate with the ranks of East Jakarta administration and Kodim to jointly help residents in overcoming every problem including floods and mapping flood/inundation-prone points in his region.

"When the flood occurs, we will also deploy a health team assisted by the health team under the East Jakarta administration and army," he said.

"It aims to help clean up the flood-affected areas and other post-flood activities," he closed.