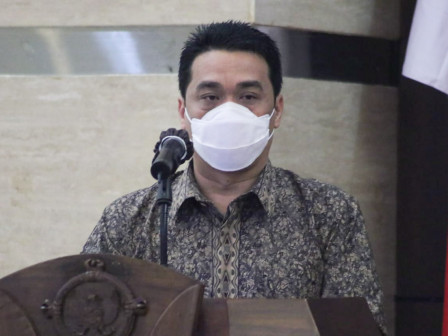 Jakarta Vice Governor Ahmad Riza Patria, assured the public not to worry about the availability of burial grounds and treatment rooms in handling the COVID-19 outbreak. According to him, what is more important is the support of the community itself, namely by increasing discipline in implementing health protocols in daily life.

"Regarding funerals, in recent weeks there has been an increase in COVID-19 patients who have died. We (the city government) has extended the graveyard. Srengseng, Bambung Ulung, including Rorotan. Once again, Jakartans need not worry," he expressed, at Jakarta City Hall, Friday (1/22).

He went on to say that the occupancy of hospital, bed, ICU room had also improved. Certainly his party was continuously controlling and realizing various support facilities, infrastructure as well as possible, including funerals.

"We strive for infrastructure, including the best human resources, the best solution is our compliance, awareness and discipline as residents. Nevertheless, we need the support from the residents," he continued.

He asserted that the speed with which the government upgraded health facilities was extraordinary. Unfortunately, the coronavirus was spreading faster and it would not be easy to overcome this without community support.

"We always say, various policies, campaigns, officials, sanctions, all of which contribute only 20 percent, the remaining 80 percent lies in community compliance and discipline. Stay at home. Don't leave the house if there is no urgent," he asserted.

Regarding the PPKM policy, he ensured that the city gave full supports.

"We're very grateful for the equalization of the PSBB period. Initially we set it in the Greater Jakarta only but now the central government equates Java to Bali. So it's better," he uttered.

His party also hoped that support for Greater Jakarta, especially Botabek (Bogor, Tangerang and Bekasi), which had been going well so far, should continue to be improved. It was because around 24 to 30 percent of residents treated in hospitals were non-Jakarta residents.

"We'll provide the best possible service support for all Indonesian citizens. So we support the central government to build synergy between Jakarta and Botabek," he stated.