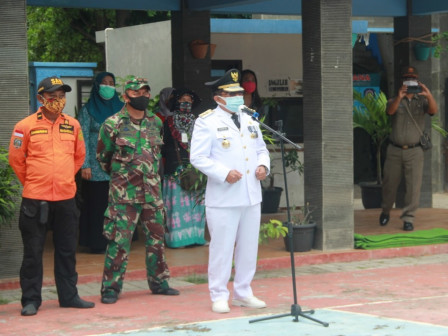 According to him, humanitarian post which consists of public kitchen, health post, PMI post, and coordination center between agencies had began to operate when Sriwijaya Air plane crashed on January 9, 2021.

"Today we officially close the operation, after conducting the operation for 14 days to search the victims," he conveyed.

After being closed, he continued, this post will be used again as disaster mitigation post of Pari Island Urban Village.

He said that the post had facilitated volunteers and personnel on duty in searching and rescuing the victims, provided food and drinks, as well as the coordination center of all agencies related to the search for victims.

Hilda (45), a representative of Sriwijaya Air plane crash victims' family heirs expressed her gratitude for attention and concern from Thousand Islands Government and all parties involved in this humanitarian action.

"We want to thank Thousand Island Regency for the attention and hopefully the good deeds is recorded by the Almighty God," she mentioned.