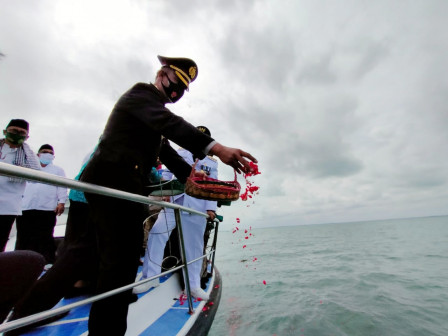 Thousand Island Regent, Junaedi mentioned, it was done to commemorate and pray for the victims of Sriwijaya Air SJ-182 in plane crash accident which happened on January 9, 2021. Basarnas has officially stopped the searching for the victims on Thursday (1/21), after extending the search operation twice.

"We want to honor the victims and pray that the victims to be granted forgiveness, and we hope Thousand Islands to be kept away from danger," he conveyed.

Head of National Search and Rescue Agency, Marsekal Madya TNI (Purn) Bagus Puruhito, his side had officially stopped the search for victims on Thursday (1/21) after extending the search twice within 6 days.

"Operation will be continued by actively monitoring the area. If in the future there are reports of findings related to the victims, we will respond it immediately," he stated.

This event was ended by officially closing the public kitchen and humanitarian post on Lancang Island, which located behind Pari Island Urban Village Office.