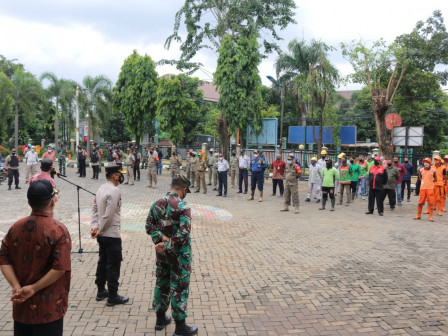 The Makasar Sub-district, East Jakarta is going to strengthen coordination and collaboration with three pillars and related SKPDs, as well as the community in order to overcome the flooding problem.

" Surely we need to discuss it together"

Makasar Sub-district Head Kamal Alatas said five urban villages in his regions were prone to flooding. "That's why cooperation with all circles is very important," he said, when he led a joint ceremony for the disaster on the courtyard of the Makasar Sub-district office, Thursday (1/21) afternoon.

While Makasar Urban Village, flood-prone areas were in RW 04, 05, 06 and 07, where it was triggered by the overflowing waters of Cipinang River and Tamini connecting channel. There was also in Kebon Pala Urban Village, where RW 01, 04, 06, 09, 10 and 11 were prone to flooding, because of the overflowing waters of Cipinang River.

As for Halim Perdanakusuma Urban Village, similar condition was also seen in RW 05, 07 and 08 that caused by the overflowing waters of Sunter River.

The flooding amid the pandemic, he asserted, the thing that needed to be watched together was the prevention of the spread of COVID-19, especially in refugee camps.

"Surely we need to discuss it together," he exclaimed.

"We also need to form SAR team at sub-district and urban village levels in Makasar," he told.

"Our army is ready to help in any condition for the safety and comfort of Jakarta people," he asserted.