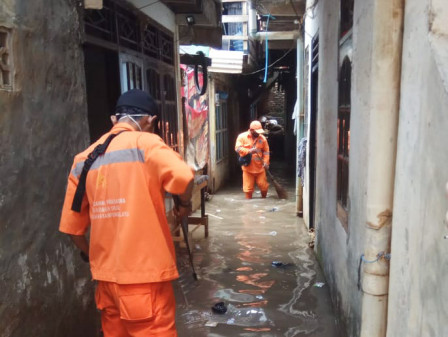 As many as 10 PPSU personnel deployed to help residents cleaning up mud and garbage from inundation that occurred in Kampung Melayu, Jatinegara, East Jakarta due to overflow Ciliwung River.

Kampung Melayu Urban Village Head, Setiawan said, 10 PPSU were deployed to RT 013/04 and RT 010/05 which flooded as high as 10-25 centimeters around 10 AM, but it had started to recede before evening.

"We deploy 10 PPSU personnel for post-inundation cleaning, because of mud and garbage scattered in the area," he added.

Those personnel were equipped with digging fork, broom sticks, dustpan, and sacks.

"They help residents who were affected by inundation by using simple equipments," he said.