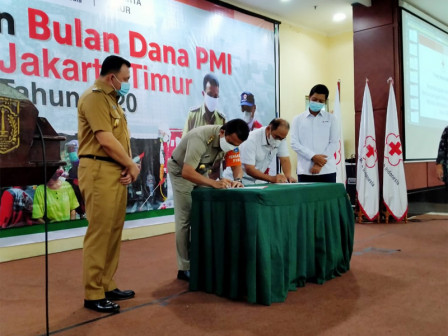 East Jakarta recorded as the highest for Bulan Dana PMI 2020 Fundraising in Jakarta.

" I thank all residents, UKPDs, and stakeholders who have supported this activity"

"I thank all residents, UKPDs, and stakeholders who have supported this activity," he said.

With this high achievement, he mentioned that level of public trust in PMI is still quite high.

"We hope PMI can be better and more professional in providing services to the community," he added.

Jakarta PMI Chairperson, Rustam Efendi conveyed, the collected funds will be returned to the community in form of social activities, such as humanitarian assistance, blood donors, in overcoming natural disasters, COVID-19, and so on.

"Thank you for all parties who have participated in Bulan Dana PMI activity," he stated.

"We will protect the people's trust. We will manage funds from the community, by community, and return it to the community in form of social activities," he asserted.