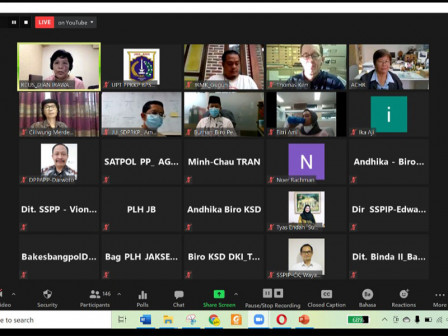 The villages in Jakarta have become an integral part of the growth process of Jakarta. Until, nearly 40 percent of the settlements in Jakarta are urban villages, which create economic and social space in the community. The contribution of the urban village to life in Jakarta is also realized from the provision of affordable housing, a variety of local food and beverages, industry and household scale services.

This became a discussion on a virtual discussion held by the Jakarta Human Resources Development Agency (BPSDM), on Friday afternoon (1/15). Collaborating with the Jakarta Development Collaboration Network (JDCN) as an integrated platform between the government and the community to collectively support the Jakarta City development program, and supported by the Jakarta Public Policy Center (JPPC) with civil society organizations, this discussion invited representatives from the Thailand Community Organization Development Institute (CODI) and the Asian Coalition for Housing Right (ACHR).

Suharti, Jakarta Governor Deputy for Population and Settlement Control disclosed, the village's integral position received full attention and commitment from the city government, through two Governor Decrees number 878/2018 on Village Arrangement Task Force and Governor Decree number 162 and 574/2019 on Agrarian Reform Task Force. Jakarta had started a study to form a special institution that would have the authority and work to implement the urban village planning program to increase and accelerate work performance related to comprehensive village management.

"The urban village has begun to be improved through a process of community involvement and empowerment. Residents are fully involved in participatory village planning (Community Action Plan) and infrastructure development in the villages (Collaborative Implementation Program) as a form of follow-up. Through the Agrarian Reform Task Force, the government tries to solve land problems, which aims to ensure security for the villages. The two programs are an integral part of realizing a sustainable and just urban village," he expressed, as quoted by Jakarta PPID's press release, Friday (1/15).

CODI Founder Khun Somsook Boonyabancha shared experiences and lessons from community planning over the last 20 years in Thailand. He explained about the establishment of institutions, land provision, collaboration with various sectors in the settlement arrangement process, and organizing residents about finances in term of storage and funding.

"We can change a densely populated area into a healthier and modern environment, in various ways, such as reblocking, relocation, and reconstruction. Develop cooperation with the land department, electricity department, universities/academics, to discuss with local communities in making housing projects," he expressed.

He also suggested that the whole community involved in implementing management and actively participating at all levels and issues. They should understand how new forms of funding were flexible, thus they could support community-led development.

"Believe in cooperation, collaboration, building partnerships, and participating in the culture," he uttered.

As for the information, CODI is a semi-public institution that was formed in 2000, which aims to facilitate and arrange village through breakthroughs in the field of agrarian, settlement arrangement, financing housing improvements in the form of revolving funds and providing infrastructure subsidies related to settlements to community groups. Until 2018, it has successfully facilitated 1,571 slums, covering 105,000 households in 2,557 communities spread across 370 cities.

During virtual discussion, various OPDs in the scope of the Jakarta administration, Ministries/Institutions, community organizations in related fields, moderated by Dian Tri Irawaty from Rujak Center for Urban Studies.