Vice Governor: Businesses must Be Disciplined to Implement PSBB Rules 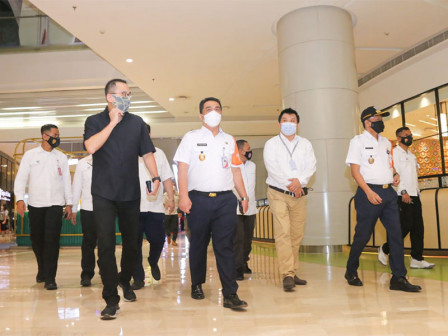 "Alhamdulillah they are all disciplined enough to implement the PSBB health protocol," he expressed, as quoted by Jakarta PPID's press release.

He went on to say that workplaces had imposed worker restrictions of up to 25 percent.

"I see that there are barriers in the office. Nevertheless, we continue to do monitoring," he furthered.

Previously the Satpol PP had monitored 833 places. From that results, he revealed, some had been closed and received written warning.

He also thanked workplaces, hotels, apartments and restaurants who had shown discipline in implementing health protocols during the first three days of PSBB tightening. Discpline was very helpful to contain the spread of COVID-19 in the capital.

"Please be patient and let's fight together. We ensure that the COVID-19 cases in Jakarta must decrease soon," he expressed.

He reminded that COVID-19 cases in Jakarta were currently still high.

Regarding burials, he expained, the provision of land was continuing. After the Pondok Rangon and Tegal Alur cemeteries were almost full, the administration prepared burial grounds in Rorotan and Srengseng Sawah.

"Yesterday, we also buried some bodies in Srengseng Sawah. Principally we ensure that burial places for the general public are prepared," he asserted.

The city was also continuously paying attention to the level of bed filling in the hospital. He admitted, capacity was running low. Additional referral hospitals were also being intensified. From the previous 98 hospitals, now there are 101 hospitals.

According to the data, he continued, 27 to 30 percent of the hospitals were filled by non-Jakarta residents.

"As a government, we do not differentiate, whoever, residents, we will accept and serve as best as possible," he continued.

Here is the recap data of violations and prosecution compiled by Satpol PP in tightening the PSBB as of January 13, as follows:

- Place of business to eat and drink/restaurant = Rp.