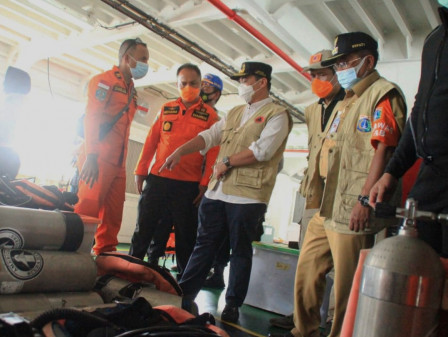 " On behalf of the city government, thank you for your cooperation in the search of the downed Sriwijaya Air plane since yesterday and in this morning"

He expressed his appreciation as all personnel from various related agencies had worked well together.

"On behalf of the city government, thank you for your cooperation in the search of the downed Sriwijaya Air plane since yesterday and in this morning," he expressed, as quoted by Jakarta PPID's press release.

Previously he was also present in coordination at the JICT 2 Command Post and directly checked the readiness of the post and the performance of the officers.

"I saw firsthand the personnel getting ready since last night with their respective duties. They are doing their job well," he continued.

He then encouraged the public, especially Jakarta people to pray together thus the plane body parts could be found. He also hoped that the victim's family could be patience and fortitude. Aside that, he also urged the general public not to easily spread hoax information.

"So let's wait for various information from the relevant authorities. Which has the right information and data accuracy," he told.

Then the monitoring continued to Lancang Island. The vice governor inspected the posts on the land and provided support to all officers. He stated, the search required energy, support, and prayer together.

In the search for Sriwijaya Air, the city fully supported all personnel on duty under Basarnas and support from BPBD, army/police, Transportation Agency, and several other related agencies.

"We do what we can and provide support in accordance with the authority and command of Basarnas," he added.

As for the information, Jakarta BPBD reports the plane crashed on Saturday (1/9) at 2:54 PM in the Tanjung Kait waters near Lancang Island, a part of Thousand Islands chain. The city has deployed a joint personnel from Transportation Agency, Rescue Team, Fire and Rescue Agency Team, Satpol PP, and PMI.