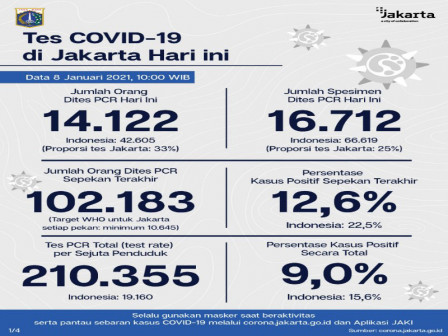 Jakarta Health Agency's Disease Prevention and Control Division Head Dwi Oktavia Tatri Lestari stated, based on the latest data, the swab tests had been carried out on 16,712 specimens. 14,122 of them were to diagnose new cases with 2,204 positive and 11,918 negative results.

"The addition of cases today totals 2,959 cases, as 755 cases are the accumulation of data from the previous days, which are newly reported. The number of people tested last week has reached 102,183, while 210,355 people have undergone the swab tests ," she expressed, as quoted by Jakarta PPID's press release, Friday (1/8).

Aside that, 44 sub-districts in Jakarta experienced additional cases, the high number of cases was dominated by Kebayoran Lama (127 new cases), followed by Cipayung (100 new cases) and South Thousand Islands (2 new cases). As many as 75% of positive cases were found in health facilities and laboratories where residents came to health facilities, while 25% were the result of contact tracing at the Puskesmas. Of the positive cases found today, 51% were asymptomatic and 49% were symptomatic.

As for the number of active cases in Jakarta to date was 17,633 people who were undergoing self-isolation at home (including data of athlete's homestead) or increased to 251 cases. From that number, 44% had no symptoms, 20% had mild symptoms, 32% had moderate symptoms, 2% had severe symptoms, and 3% had critical symptoms. For cases without symptoms and mild symptoms, underwent self-isolation in controlled isolation areas/athletes' houses/homes. As for cases being treated in the ICU. In severe and critical cases, they were also treated in the ICU at the hospital, either using a ventilator or non-ventilator.

She went on to say that at least 33 out of 44 sub-districts in Jakarta had reported family clusters after the Christmas and New Year holidays. Based on data collected on January 3 - 8 for the family cluster after public holidays where some residents had activities outside Jakarta, there were 111 family clusters with a total of 351 positive cases identified (table of distribution of family clusters and travel provinces is attached).

While the peak of additional cases during public holidays effect (direct effect/first generation) was predicted to be 14 days after the holiday, precisely on January 17 - 31. For that, need to be aware of an increase in family cluster. She urged the public to continuously comply with 3M protocols and avoid crowds. In addition, they should remind each other to always apply health protocols.

Amid the transitional PSBB, residents wanting to enter the Jakarta area were urged to carry out independent COVID-19 check-up through the JakCLM via JAKI app. In this app, they could find out the risk of COVID-19 and got various health recommendations according to the risks they have. This contribution would help the government to prevent the diseases in Jakarta.

Together with Satpol PP, the operation for residents who do not wear masks will also be intensified, including other PSBB violations. Hopefully, they can be more disciplined in implementing health protocols and participating in stopping the chain of COVID-19.

As for the information, the community also has the opportunity to donate with others in the large-scale social collaboration (KSBB) program. They can provide aid in the form of staple foods, fast food and cash. For further information, please visit corona.jakarta.go.id/kolaborasi.