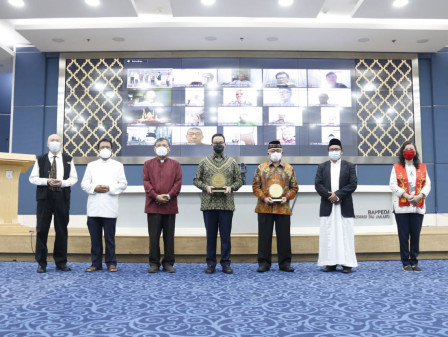 Jakarta administration together with the Jakarta Religious Harmony Forum (FKUB) won the 2020 Harmony Award from the Religion Ministry. The award was obtained for the contribution of the regional government together with related units in the development of religious life and harmony.

In appreciating this achievement, the Jakarta Governor Anies Baswedan, stayed in touch with representatives of the FKUB representatives at City Hall in the gathering held virtually on Wednesday (1/6).

The governor said the award was extraordinary. It was because even during the COVID-19, residents together with various related stakeholders were still able to commit to maintaining a conducive atmosphere and creating harmony between religious communities.

"All elements of regional leaders have a shared commitment to maintaining regional conductivity, harmonious relations between adherents of different religions, mutual respect for ethnic and cultural diversity thus economic development towards the ideal of becoming a developed and prosperous country will be increasingly realized," he expressed, as quoted by Jakarta PPID's press release.

He hoped that this achievement could be maintained. He also urged all elements to continuously maintain religious harmony in Jakarta. Apart from being able to build harmony, the award could improve services for various problems that had the potential to disrupt relations between religious believers.

"It is not only a form of appreciation for us in government. This is because Jakarta is a miniature of Indonesia in seeing a map of religious harmony. Almost all religions in Indonesia are here with various roles and contributions in development," he explained.

Jakarta FKUB Chairman Dede Rosyada, exclaimed that Jakarta was able to win the award as it fulfilled four assessment variables. Among them, harmony between religious believers, innovation from the local government and FKUB, cooperation and support between FKUB and the regional government, and active activities to prevent conflicts of religious communities.

"The innovation we are doing is actively taking part in overcoming the impact of this pandemic which has had a lot of impact on us. That's why FKUB is here to distribute aid from the local government and companies. We as human beings prioritize humanity rather than personal interests thus interfaith harmony can be maintained properly," he explained.

Aside that, they also remain committed in providing public services related to the establishment of houses of worship. Last year, they received seven applications for a recommendation for a building permit (IMB) for houses of worship from various religious groups.

Of seven applications, five was issued for recommendations, while the other 2 were still under process. The recommendation letters issued were 1 monastery, 1 temple, 1 mosque, 1 Catholic church, and 1 Protestant church. This confirmed that the FKUB never rejected requests for the construction/renovation of houses of worship.

As for the information, the gathering itself was attended by the Acting City Secretary, Sri Haryati and her ranks; all FKUB Religious Council Chairmen; and regional FKUB Chairmen.