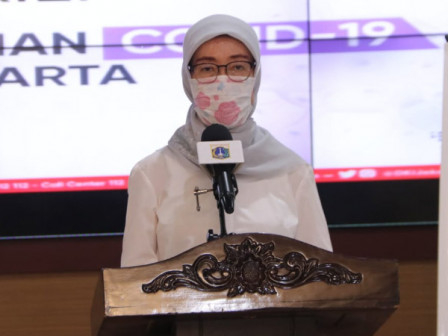 Jakarta Provincial Government announced on Sunday that it would extend the transitional large-scale social restrictions (PSBB) for another two weeks until January 17.

" We should be aware of this active case, especially after the Christmas and New Year holidays"

It was in accordance with Governor Decree number 1295/2020, where the city focused on pressing the additional cases, one of which was due to the Christmas and New Year holidays.

The city claimed that it saw the coronavirus transmission increased by 15,471 within 14 days or 18 percent, which previously reached 13,066 cases on December 20.

"We should be aware of this active case, especially after the Christmas and New Year holidays, which have the potential for additional cases," told Jakarta Health Agency Head, Widyastuti, Sunday (1/3).

The vigilance stressed by her was also based on the incidence rate (IR) and the additional vulnerable RWs in Jakarta, where there were 21 RWs prone to the coronavirus, and it had increased to 55 RWs as of December 27. That meant, only two urban villages were safe, namely Kelapa and Pari islands.

"This increase occurred with the IR rate per area reaches 19.58, followed by the sub-district level 25.43 and urban village level 30.64," she added.

Aside that, the mortality rate due to COVID-19 was also alarming, as there was a significant increase in the death rate from the disease, where on 20 December, the total number of dead patients was 3,087 people and it increased to 3,334 people in two weeks.

In the meantime, she also explained that the use of daily isolation beds (inpatient rooms) and ICU rooms in 98 COVID-19 Reference Hospitals was likely to increase, despite Jakarta had added isolation beds from 6,663 units on December 20 to 7,379 units on January 3. The capacity of the bed had reached a percentage of 87% with 6,385 isolated patients as of January 3.

"For ICU room as of January 3, we have increased the capacity to 960 and 762 have been filled. Thus its capacity reached 79% and decreased at 1% from the previous two weeks where the percentage of filling was 80%, as the ICU capacity at that time was still 907 and filled with 722," she detailed.

She went on to say that the effective reproductive value (Rt), which is an indication of the level of transmission in the community, showed a score of 1.06 as of January 2. This number decreased from the previous weekly scores, namely 1.07 on December 26 and 1.06 on December 19. The Rt value should be below 1 for the coronavirus outbreak to be properly controlled.

As foe the assessment score based on the COVID-19 control indicator from FKM UI was 59 as of January 2. When compared to the previous weeks it had decreased, namely a score of 61 on December 19 and 26. A score above 60 means that the PSBB can be relaxed in several sectors through gradual assessment. If it is below 60, surely some tightening in certain sectors needs to be done.

Based on these various data, the Governor emphasized the city's focus on this transitional period was to further increase the 3T in order to identify active cases through testing and tracing, as well as hold treatment as soon as possible if positive cases are found, especially after holidays.

"Based on the assessment from BNPB and FKM UI, we decided to extend the transitional period. We will consistently run 3T (testing, tracing, treatment), while the community applies 3M (washing hands with soap, wearing masks, and maintain physical distancing) thus the spread of this disease can be handled together, especially after national holidays," he closed.