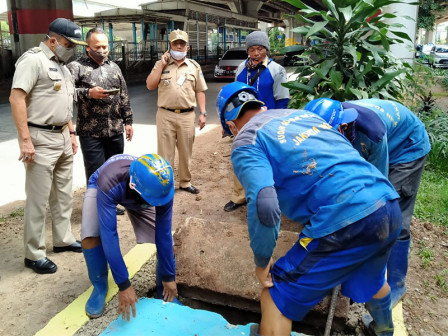 " Based on our data, as many as 39 wells have been made on Jalan DI Panjaitan"

He said, those wells were made to anticipate inundation and flooding in the region. Besides that, connecting channels around the location were also routinely cleaned.

Even, at the location, there were two crossing channels connected with Sunter River. They were built under Jalan Raya DI Panjaitan in mid-November and was completed yesterday.

"Based on our data, as many as 39 wells have been made on Jalan DI Panjaitan. 15 are by the SDA task force and the rest are through CSR," he told.

He explained, 24 wells had 3 meters depth and had no absorption pipe as deep as 20 meters. Hence, his party ordered the SDA task force to renew all wells built through the CSR.

"Along Jalan DI Panjaitan until Jalan MT Haryono, there are 30 government and private offices. They have asked us to participate in developing wells inside and outside the office," he furthered.

Its existence also aimed to accommodate water and maintain the soil quality to remain fertile.

Currently his party i s still focused on drilling process for the installation of infiltration pipes as deep as 20 meters at each point.

"We're still developing 15 wells. It starts from the front of Jatinegara Sub-district office until Al Bahri Mosque," he said.

His party would also renew 24 wells constructed by the CSR.

"We are about to drill them in a depth of 20 meters," he concluded.