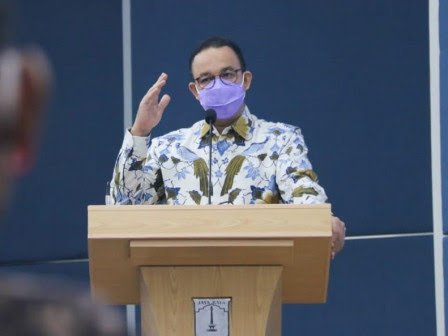 Jakarta succeeded in achieving the Human Development Index (HDI) with the predicate "very high" in 2020, reaching 80.77. This score exceeds the national average of 71.94 and is the highest ranking in Indonesia. Its score is obtained when the HDI is above 80, followed by the high status is 70-80, medium is 60-70, and low is 60.

" This is my appreciation to the Governor"

Jakarta Governor Anies Baswedan expressed his appreciation to his ranks for their performance in efforts to improve public welfare, especially amid the COVID-19 outbreak. In this case, the city administration had upgraded the vision and policies for the city development, which were presented in the Musrenbang on 2017-2022 RPJMD Amendment, Tuesday (12/22).

"First, we did a neighborhood-based spatial planning where all residents' needs could be met without the need to travel long distances, then prepared basic city-resilient facilities and services. Third, we improve digital infrastructure as the backbone of modern data-based governance. Then is the integration of population data to produce appropriate social interventions, as well as economic reform by encouraging industry based on experience and added value," he explained, as quoted by Jakarta PPID's press release, Monday (12/28).

On the other hand, the Home Ministry (Kemendagri) appreciated the Kemendagri General Secretary Muhammad Hudori, expressed his gratitude to Governor about the achievement that exceeded the national average.

"This is my appreciation to the Governor. That means, Jakarta is above the national average, which is around 71.94," he said, on the sidelines of the Musrenbang on Jakarta 2017-2022 RPJMD Amendment, Tuesday (12/22).

He mentioned that there were three important factors determine the quality of life of the people in Jakarta, thus contributing to the highest HDI figure in Indonesia.

"They are a long life and a healthy life, in terms of knowledge, and a decent standard of living," he told.

The HDI measures the achievement of human development based on a number of basic components of quality of life, such as long life and healthy life, knowledge, and a decent standard of living. It is an important indicator to measure success in efforts to build the quality of human life that determines the rank or level of development of an area. For Indonesia, it is strategic data, as apart from being a measure of government performance, it is also used as one of the allocators for determining the General Allocation Fund (DAU).