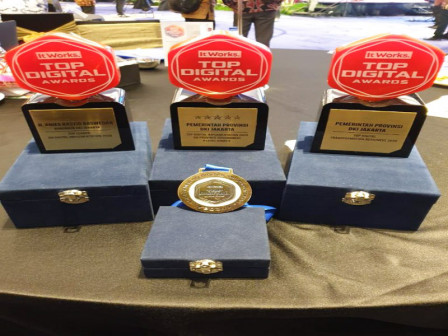 Jakarta Provincial Government and Jakarta Governor Anies Baswedan, won the TOP Digital Awards 2020. The award was given at the peak event of the TOP DIGITAL Awards 2020 at the Ballroom, Rafles Hotel Jakarta, on Wednesday (12/22).

" Surely I feel grateful for the award. This award is the result of collaboration of many parties which also deserves appreciation for their hard work"

"Surely I feel grateful for the award. This award is the result of collaboration of many parties which also deserves appreciation for their hard work," he told, as quoted by Jakarta PPID's press release, Wednesday (12/23).

He also explained the city's innovations in the field of technology, such as the JAKI Super App to integrate all data into one digital application and JakWiFi, which facilitates the internet to remote areas in the capital.

"We also focus on digital transformation within our ranks thus the bureaucratic administration system can run easily, can be fast, efficient, and ensure that good governance principles such as accountability and transparency can be done as well as possible," he explained.

He hoped that digital transformation could be continued under the umbrella of collaboration.

"In the future, we are about to continue digital transformation with policies that are collaborative-based as we want to involve all residents who can contribute thus the best ideas, ideas, innovations in society may actively participate in jointly developing the city of Jakarta," he expressed.

The TOP Digital Awards 2020 ceremony was also attended by Communication and Information Minister Jhonny G. Plate, as the keynote speech that was delivered virtually representing the Vice President KH Ma'ruf Amin, welcomed this activity, and congratulated the award winners at the event.

"On behalf of the government, I would like to congratulate agencies, companies and institutions and others for the achievements and awards," he expressed.

He explained its implementation was in line with the government's commitment and efforts to accelerate digital transformation in the country as well as readiness to enter the fourth industrial era (Industry 4.0).

"The government is committed to continuing to increase the acceleration of digital transformation, including through improving digital infrastructure, especially telecommunications and internet infrastructure, including in the 3T. This is also in line with the government's efforts to continue to encourage the development of the digital economy, which in 2021 is predicted to reach Rp 337 trillion, an increase of 33% from 2020, which is based on research by Bank Indonesia (BI) during 2020 the value of the digital economy reached Rp 253 trillion," he expressed.

TOP DIGITAL Awards is the biggest award in the IT TELCO/Digital Technology field in Indonesia, organized by It Works magazine. It is a corporate rating (award) activity and learning Business Solutions in the form of digital IT TELCO for corporations and government agencies.

The Top Digital Awards 2020 valuation method uses three methods, namely through questionnaires & judging interviews, user or community recommendations, and through market research. This year the theme is "Top Digital Innovation & Implementation in New Normal". This means that by continuing to make innovation and digital transformation, it is hoped that it could be a solution and an increase in competitiveness in this new normal era of adaptation.

The valuation stage involved more than 800 companies and government agencies. Then, based on the recommendations of experts, consultants, and the TELCO IT association, 200 Finalists/Candidate Winners were determined.

Of the 200 finalists, 160 attended the complete valuation stage. The number of participants who are finalists for digital innovation this year had increased by 25% than last year, which was 128 Finalists.

During the assessment and judging process, the jury identified several important findings and formulated strategic solutions. As part of the effort to develop the nation towards an advanced Indonesia, It Works magazine and the TOP DIGITAL Awards Jury would present the document "TOP DIGITAL Recommendations" to President & Vice President, Indonesia Maju (Indonesia Onward) Cabinet, and several other stakeholders.